Truss Bridges are a class of bridges which use frameworks, called trusses, to support the bridge deck from above, from below, or some combination of the two. Trusses are composed of straight bars, called members, joined at their ends at various angles, to create a shape composed of triangles. When loads are applied to the joints of the truss, every member experiences compression or tension, distributing the load over large distances. Truss bridges have very high strength to mass ratios, allowing them to span large distances without being extremely expensive in terms of pieces.

In addition to classifying truss bridges by the location of the truss, the shape of the truss is also considered. While there are far too many shapes to be considered, there are three very basic, common ones, the Warren Truss, Pratt Truss, and Howe Truss. They differ in the angles of diagonal members and the shape of framework. They also differ in which members are in tension and which in compression (all truss bridges will have some members in tension and some in compresssion, unlike suspension bridghes which have almost all in tension, and arch bridges which have almost all in compression

The Bollman Truss was very common on the B & O Railroad, but not often used in other contexts. It is included here because construction of one out of LEGOs would be fairly easy - Technic bars could provide the entire framework in commonly-available sizes. [1] 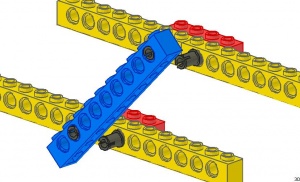 One arrangement that produces a truss

The problem that many beginners face when they are starting to build Lego truss bridges is the issue of building triangles. Lego is a primarily rectangular medium, so some thought needs to go into the construction of sturdy, angled frameworks.

A very commonly-used technique is to use Lego Technic elements to construct trusses. 1xN bricks with holes are placed next to each other and 3L pins are used to place 1x4 with holes behind them, to hold them in line. The protruding end of the pin is used to place bars on angles with other brick assemblies, allowing bars at angles. While this approach is easy and requires only pins and bricks with holes, it doesn't allow the diagonal members to meet in true truss-bridge fashion. This approach will work for smaller bridges, but different ones will be needed for structures spanning longer distances (or carrying much larger loads).

1 - All images were generated with West Point Bridge Designer 2005. Visit this page to get your own copy.

This article is a stub. You can help by adding to it
Retrieved from "https://www.brickwiki.info/index.php?title=Truss_bridge&oldid=24107"
Categories:
Clean up > Stubs
Menu > Building with bricks