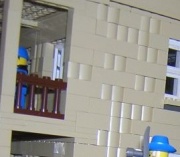 This article will cover various techniques for wall texturing, including log bricks mixed with regular bricks and other more advanced techniques.

The most basic form of wall texturing involves mixing some of the textured standard LEGO bricks in with regular bricks to break up the monotony of a wall. Whilst being relatively simple to use, these techniques can greatly add to the appearance of a model.

This building uses many different types of bricks to achieve a weathered and damaged texture.

At right, POV3, the BrickFest 2005 Best of Show model by Steve De Craemer, uses SNOT texturing. A multitude of technic bricks with 1 1/2 pins in them hold tiles in a vertical alignment to give the appearance of large format masonry.

At far right is an example of something similar by James Mathis.

At right are links and pictures to some more advanced wall texturing techniques available. As with any LEGO design technique the possibilities are as endless as one's imagination. The pictures and links here are provided to give inspiration for new technqiues.

This article is a stub. You can help by adding to it
Retrieved from "https://www.brickwiki.info/index.php?title=Wall_texturing&oldid=25503"
Categories:
Clean up > Stubs
Menu > Building with bricks > Techniques