There are many ways of making walls, whether it is for buildings, vehicles, or whatever else.

To create walls, you can simply stack bricks. But you have to respect some principles if you want to obtain some solid and good looking results. 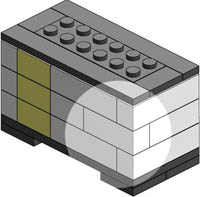 The higher your wall is the larger bricks you should use. A wall higher than 5 courses(every horizontal layer of bricks) needs to be built using 2xn bricks. Of course, you could build with 1xn bricks if the wall uses structural reinforcement such as buttress.

Another point for solidity is to create an offset between the vertical joint of each course, which Steve Barile has described as "crossing your line" (Quoted by Jake McKee in his book "Starting with LEGO trains").

When using 1xn bricks, in the corner, the 2x2 corner bricks are widely used to perform this offset. 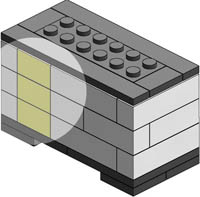 Stacking without offset is used to create decorative shape. For advanced information on appearance, check out wall texturing.

If you build a very long wall using only alternated 1x2 bricks, you will notice that you can bend it a little bit because of the room between the bricks. The minimum radius of this wall is quite big (please add the value here if you know it). 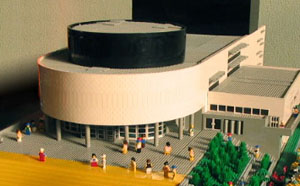 This technique may be considered by certain AFOL as an illegal connection since it stresses the bricks a little.

You can also use 1x3 plates and 1x1 round plates if you want to make a low wall.

The disadvantage of this technique is that the wall is not perfectly smooth.

There are also some round bricks that you can use:

Sometimes a builder might wish to make a wall that is not at 90 degrees to an adjoining wall but is still straight. This can be achieved using a variety of methods.

LEGO produces a number of elements that are sometimes described as modified bricks featuring one face that is at an angle other than 90 degrees. Stacking these bricks cretes a wall surface that features small gaps as the design of the bricks requires small cut outs to allow for the connecting studs to be bridged.

A distinctive feature of the Cafe Corner and subsequent sets in the Modular houses standard has been corner walls angled at 45 degrees to the connecting walls. This is achieved by mounting the wall segments on what Peeron describes as Turntable 2 x 2 Plate[1].

Hinges can also be used to create a stable angled wall as demonstrated in a video featuring Designer Jamie Berard.

It exist a great variety of pattern for brick walls :