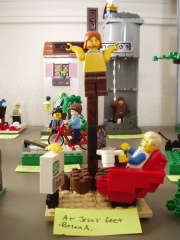 8x8 vignettes from an IndyLUG contest in 2005
Vignettes is a fan created theme that creates scenes on a plate that measures 8x8 studs or smaller. Scenes created on larger baseplates are sometimes called bignettes.

Vignettes (or vigs for short) are scenes, usually at a minifig scale , that are confined to a small plate (usually a 8x8 or even 6x6 footprint, though this can vary). There are several advantages of the small footprint. It forces the builder to find creative ways to build in a small space. The builds tend to be fairly fast and piece non-intensive, which makes these more accessible than a whole town or castle layout. Unlike a large layout or even a largish MOC, vignettes can be taken in fairly quickly. The best vignettes make creative use of the space available, convey a sense of action, imply the remainder of the scene lying beyond the small baseplate of the vig itself, capture a scene that tells a story, and often have a sense of humor.

Around 2002, it seems, someone on a Japanese language AFOL forum challenged other forum members to build scenes on a minimal 6x6 baseplate. Many of these scenes were collected in the Art Museum of LEGO Vignette. Some were also posted on Brickshelf. These were noticed by members of the Classic-Castle forums in the fall of 2004. Several forum members posted vignettes. From there it seemed to spread to From Bricks to Bothans and, subsequently, Lugnet forums. In October of 2004, a request was made to introduce a vignette forum on Lugnet, but at the time it was considered that vignettes were possibly a temporary fad, and so no new forum was created. Over the next several months, vignettes gained in popularity. For instance, they were an extremely popular category in the annual Classic-Castle Colossal Castle Contest II, with almost 60 entries. In March of 2005, Lugnet added a vignette forum, and the VignetteBricks blog was created to highlight cool vig creations. Later that month, the curators of the Lugnet forum introduced Joe Vig, a hapless figure who has become a mascot of sorts for the fan theme. Vignettes continue to be created, with several LUG meetings featuring them, and a contest at the August 2005 BrickFest meeting.