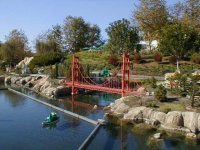 Suspension bridges are a class of bridges which use cables under tension to hang the bridge deck/load. The tension in the cables is transferred to compression in towers and/or anchorages, located at various points along the bridge. Suspension bridges can span vast distances and can be used in designs where piers are impossible or impractical.

Suspension bridges utilize a number of main components. There are cables, towers, anchorages, and a deck. When working on LEGO suspension bridges, often the deck, towers, and anchorages are built with Lego bricks, while Lego chain is not often used for cables or suspenders. This is because Lego chain is not extremely strong and it is fairly expensive. Often, Lego bridges use cables such as dental floss or steel wire. Non-Lego materials are also some times used as or in the anchorages.

To strengthen the deck of the bridge, trusses or plates are often used. Cable-stayed bridges often include such reinforcing underneath the deck to provide stiffness.

There are two types of suspension bridges often used in Lego construction - classical and cable-stayed. Both utilize the same principals of operation and are achievable with Lego bricks, but have variations in design.

In a classical suspension bridge, there is one main cable per side, spanning from anchorage to anchorage. This cable is passed over each tower and naturally forms a catenary curve under the influence of gravity. The deck is suspended from the main cable by evenly-spaced vertical cables, which change the shape of the main cable from a catenary to a parabola after it is loaded. In Lego structures, often the weight of the bridge deck does not fully transform the cable shape, but rather leaves a curve that is neither a true parabola nor a true catenary. 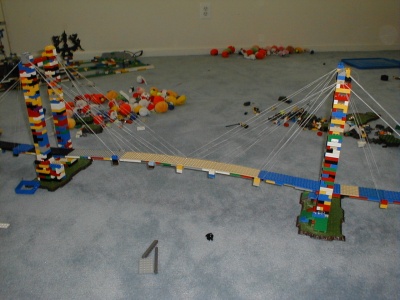 In a cable-stayed bridge, there is no main cable. Instead, individual cables connect either from the cable-harness (as in the adjacent photo) or to various points along the vertical towers. These two approaches are called radial attachment or parallel attachment. This type of bridge doesn't require the creation of massive main cables, but instead spreads the load across multiple cables. This is an advantage for Lego bridges, since it is difficult to construct primary cables of the correct scale for Lego bridges.

In the design at the right, there is a lot of load on cable harness. The harness also concentrates that load at a point (per tower), which results in a higher chance of failure per cable.