Studlessness is the quality of an object in which studs do not appear. Amongst AFOLs it has two similar meanings in different contexts both discussed below.

The term was first used by Geordan Hankinson in lugnet.space in July of 2002. Space theme fans are known for their affinity for studlessness, but the technique is also used in such themes as mecha and Town.

Studless creations often combine the use of studless parts (such as tiles) with SNOT building techniques. 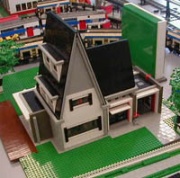 In the context of Technic models studless refers to the use of the newer Technic bricks and plates which have no studs for aesthetic and practical reasons. Most official Technic models from 2000 on (including the NXT kit) are almost entirely studless.