This article is about modeling statues (in whatever scale). For creating real ones from LEGO elements go to sculptures or freelance builders. 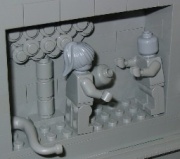 Statues may be modelled in LEGO, most typically by using all grey or white pieces in a position and arrangement designed to invoke a statue (for example, appearing in a wall recess or upon a pedestal).

A statuary (collection of related statues) is sometimes found decorating the front of a peaked roof, as in this beautiful example by Teup on Brickshelf. Sometimes, but not always, these are gargoyles.

In some cases, it may be hard to tell a statue from a decorative suit of armor, as in this example, but this is not an important distinction to most viewers.

Statues sometimes appear in conjunction with fountains, as shown here.

Jojo Koehler has more great examples of LEGO statues, including Artemis and Amor.

This article is a stub. You can help by adding to it
Retrieved from "https://www.brickwiki.info/index.php?title=Statues&oldid=21559"
Categories:
Clean up > Stubs
Menu > About Brickwiki > Admin > Disambiguation
Menu > Building with bricks