From Brickwiki
(Redirected from Pirate)
Jump to: navigation, search

Pirates is an official LEGO theme that first ran from 1989 to 1997 and was re-introduced and updated in 2009. The theme's apparent end in 1997 came as a shock to some AFOL's, because the Pirates line had always been a big seller. A few Pirates sets were re-released between 1997 and 2009 in the Legends series.

There have been pirate-themed sets in non-minifig (or system) scale. In 2004, LEGO released the 4+ Pirates line, which targeted a younger audience, used fewer and simpler pieces (often referred to as juniorization) and larger, Jack Stone sized figs. In 2006, a DUPLO Pirates series was released for small children.

A running joke in the AFOL community for many years claimed that there were only two pirate fans in existence: Steve Jackson, who invented Evil Stevie's Pirate Game (or ESPG), now often played at conventions like GenCon and Origins International Game Expo by the other Pirates fan, Frank Filz (and others from GameLUG).

Since the emergence of PirateBricks.Com in 2005 and other online forums that followed, it has been observed there are significantly more than two pirate fans.

LEGO has also released a variety of official Pirate Lego merchandise ranging from clothing to stick-on tattoos to board games.

The Pirates: The Golden Medallion

The Pirates: The Golden Medallion is a Pirates comic book released in 1989. It tells one adventure of Captain Red Beard's crew.

An official series of children's books based on the Pirate Lego theme was published by Ladybird Books in 1990.

The stories revolved around the misadventures of the crew of Dark Shark and their run-ins with Broadside's Imperial Guards. The stories developed a stronger characterisation for key characters and expanded the Pirate Lego universe. They also introduced a character known as Captain Foul who commanded the ship “The Barracuda”, however the captain or ship did not appear in any of the official Pirate Lego sets.

Like the comic Governor Broadside was given a family which included his Aunt Prudence and niece Camilla. The entire crew of the Dark Shark (6285/10050 Blacks Seas Barracuda) were given names even including the monkey and parrot!

A short biographic description and illustrated portrait of each of the Dark Shark’s character was presented on the first and second page of each book.

On the final two pages of each book is a map of the fictional archipelago named “The Treasure Islands” in which the Ladybird Pirate Lego universe is set.

For its 1993 World Expo, the Lego Group chose “Pirates Ahoy” as the theme. The exposition contained various exhibits mostly depicting three dimensional sculptures of pirates made entirely from Lego, although a Pirate Galleon containing 13,280 pieces was built at System minifigure scale and was crewed by standard Pirate Lego minifigures.

A souvenir guide accompanied the exposition and its main feature was a story which loosely tied the exhibits together in a first person narrative. The souvenir guide also provided information about each exhibit including its name, how many pieces it contained and the number of hours it took to construct.

The top-left corner of odd pages contained information and an illustrated portrait of infamous pirates from history including Blackbeard and Bartholomew Roberts. While top-right hand cornered of the even pages included a picture of that pirate’s flag. 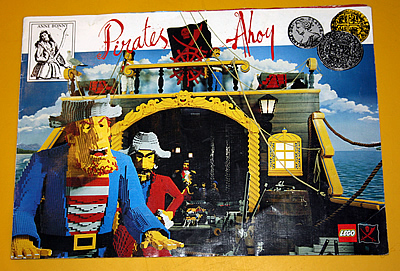 One day a long time ago I sailed the ocean blue with old Captain Roger and his Lego Pirate crew. That balmy night we gathered in the galley for a fish of hot rate stew, and sausages, and boiled cuttlefish. And I overheard two mutineers whispering ‘bout a plot to steal our precious treasure map and make off with the lot.

But the Captain caught them in the act and roared, “You’ll walk the plank and live with old King Neptune on that galleon we sank!”

We found the Island on the map and camped by a lagoon, and drank and danced till midnight to a merry pirate tune. A training class was organised for all of those aboard, where everyone learnt how to fight with musket, knife and sword.

When we were fit to go the Captain said “Look for a grave. From there we’ll find the pathway to the secret treasure cave.”

“Aye, Sir,” we said, and shook our heads, so it was a great surprise when, lo and behold. We found the gold. It was immense in size.

Evil Stevie's Pirate Game is a game which involves elements of both role playing and tactical combat in a similar vein of tabletop/miniatures games, with rules tailored to suit Pirate Lego.