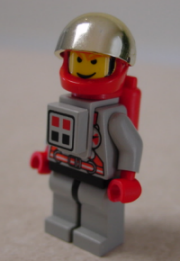 A minifigure (or minifig) is the standard LEGO 'person'. They have gone through a number of changes through history They were originally yellow and had a simple smiley face but since then a wide variety of colors, features and expressions have been introduced.

Themes can be classified by whether they have minifigs or not. For those themes which include minifigs the defining characteristic can be the minifig. The colors and styles of clothes identify the faction or theme and can even give it a name (ie: Forestmen or Black Falcons.)

Minifigs Consist of three major parts: Head, Torso, and Legs. Accesories can be added as well, for example: a variety of headgear, including hair, hats and helmets.

Some AFOLs create representations of themselves called Sig-figs which allow them, in minifig form, to enter their own or other's MOCs.

This article is a stub. You can help by adding to it
Retrieved from "https://www.brickwiki.info/index.php?title=Minifigure&oldid=25261"
Categories:
Clean up > Stubs
Menu > Building with bricks > Elements > Figures
Menu > Terms