Knights' Kingdom is the name for two different Castle subthemes released in 2000 and 2004.

The first playtheme released in 2000 under Knight's Kingdom is often referred to as KK1 by the fan community, which is also often used as the name of the "good" faction contained within the theme. It centered around King Leo and Cedric The Bull, leader of the Bulls. The theme consisted of a main release of sets in December 1999, and a second release of small sets in mid 2000. The second release of sets focused around collecting each set to obtain a different chrome element (a helmet, sword, body armor, and Bulls shield).

The second iteration of Knight's Kingdom (2004-2006) centers around a set of more defined characters in the Kingdom of Morcia. The theme changed in 2006, picking up some of the same characters "years later", when one of the good knights Jayko had become king. Each storyline features the same villain, Vladek, who attempts to take over the kingdom.

Unlike previous castle themes, this version of Knight's Kingdom focused largely on the characters. The good Knights of Morcia were brightly colored, resulting in the nickname jelly-bean knights by some fans. In addition to the minifig versions, each character was also available in a large scale constructable form, each approximately 9" tall. Further, a wider set of media was released in conjunction with the theme, promoting it, such as children's books, a collectible card game, a board game, and online games and comics. 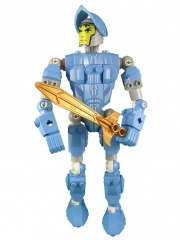 In 2004, Vladek is the villain, who leads the Shadow Knights. According to the story, Vladek secretly wrests control of the kingdom from King Mathias, and turns many of the Knights of Morcia into Shadow Knights. The remaining good knights go through a series of trials (each capitalizing on their specific talents) in order to defeat Vladek and free King Mathias.

In 2005, Vladek returns with a force of Shadow Knights, and is defeated once again by the good knights of Morcia. Following their adventures, Jayko is made the new King of Morcia, taking Mathias' place.

In 2006, the kingdom is threatened again by Vladek, who now seemingly leads the Rogue Knights rather than the Shadow Knights. The story also leaves behind Mathias, Santis, Danju, and Rascus, but introduces 4 new main characters: Sir Kentis, Sir Ardic, Karzon, and Dracus.

The second series provoked much negative feelings especially among adult fans who owned Classic Castle sets as children and was often derided using the alternate theme name: Jellybean Knights. The main complaints were: