When AFOLs are constructing buildings to resist impact or damage, the challenge is to construct a system of supports that are both capable of withstanding the required loads and that don't take up too much interior volume. If an AFOL were to build a solid cube, it would certainly survive impacts, but there would be no interior volume. 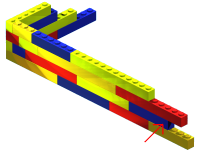 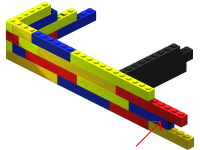 If you examine the two pictures at the right, you will see that they are side wall from simple buildings. They are very similar, with the second one only containing a black support located far from the corner of the wall. If you were to hit the wall along the red arrow with a constant force, the load on the corner joint would be far more in the first design than in the second. This is because the second support creates a new fulcrum, greatly reducing the moment of inertia of the wall extended from the joint.

The force of something striking this wall along the red arrow is tranferred into the black bar in the second picture. If you think of a simple building, with four thin walls, it would make sense to extend the bars across the building, to allow the transferred force to be dissipated opposite the impact. The problem with doing that is the threat of crumpling - these supports do not need to be placed on the floor of the building, but could also be located very high in the walls. To resist crumpling piers could be used to support these bars from below.

The danger with using too many spaced supports is that they use a lot of space inside a building, especially when piers are involved. Also, the spacing of these cross-supports is important - too far and you lose the benefits of them between bars; too close and they offer very little strength gain per weight.

Even though this sounds like a very elementary technique, it is worth mentioning, since you can optimize the placement of building supports though calculations. The overall effect of a matrix of supports is to divide the wall into different regions, each of which will break or sustain load independently of its neighbors. 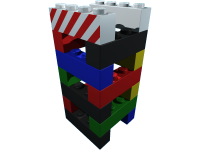 To create a structure that allows well-placed crossbars and other supports, without taking up too much interior space, we have the hollow core block at the left. It is constructed of 1x4x1 bricks, built into a mini-tower. This shape has crossbars extended to nearby walls, in a symmetric fashion. To give the core strength, a stack of 2x2x2 bricks is inserted into the center, which gives this core resistance to forces on its corners.

At the top of the core, thick bars are connected to the side walls, to cap off structures. Multiple cores can be placed next to each other, to support each other and to extend coverage.

To span very large areas, four such cores are placed near each other in a square/rectangular pattern and strongly connected together. Then sub cores of can be placed further out and linked to the center core.

When constructing buildings for the Megalith Game, a technique sometimes used to withstand objects that can puncture walls is a filled void. A building is constructed with two walls, one inside the other. The hollow space between the two walls is then filled with rubble, random bricks poured in in every which way.

This article is a stub. You can help by adding to it
Retrieved from "https://www.brickwiki.info/index.php?title=Impact_resistant_buildings&oldid=10990"
Categories:
Clean up > Stubs
Menu > Building with bricks > Techniques